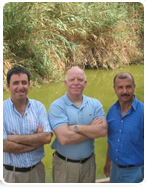 In January of this year, Friends of the Earth Middle East (FoEME) and Water Resources and Action Project (WRAP) signed a Memorandum of Understanding expressing the desire for ongoing collaboration between the two organizations. As a result of this memo, the two organizations will work together to improve water usage practices and access to potable water in East Jerusalem and Palestine.

FoEME is a unique organization that brings together Jordanian, Palestinian, and Israeli environmentalists. Its primary objective is the promotion of cooperative efforts to protect shared environmental heritage. In so doing, it seeks to advance both sustainable regional development and the creation of necessary conditions for lasting peace in the region. FoEME has offices in Amman, Bethlehem, and Tel-Aviv, and is a member of Friends of the Earth International, the largest grassroots environmental organization in the world.

Originally founded as “EcoPeace” on December 7, 1994 at an historic meeting held in Taba, Egypt, FoEME came about as environmental non-governmental organizations from the Middle East met with the common goal of furthering sustainable development and peace in the region. For the first time ever, Egyptian, Israeli, Jordanian and Palestinian environmentalists agreed to join forces in an effort to promote the integration of environmental considerations into the regional development agenda.

FoEME”s three co-Directors were honored by TIME Magazine as Environmental Heroes of 2008. FoEME received a UNDP/UNEP SEED Finalist Award in 2008 and in 2009 was granted the prestigious Jeff Skoll Award for social entrepreneurship. In addition, the April 2010 issue of National Geographic magazine features the work of FoEME concerning the rehabilitation of the lower River Jordan. FoEME also recently received the first Onassis Prize for the Protection of the Environment and the EURO-MED AWARD FOR DIALOGUE within the theme “Intercultural Dialogue for Ecological Sustainability.”

The vision created by the organization is that we are neighbors sharing the same resource that physically crosses our respective communities, with the actions of one impacting the other and the state of water systems and habitats as a whole. The people and wildlife of our region are dependent on many of the same natural resources. Shared surface and sub-surface freshwater basins, shared seas, common flora and fauna species and a shared air-shed, are some of the characteristics that necessitate regional cooperation. Examples include the Jordan River Basin, a major source of freshwater in a water scarce region, the Gulf of Aqaba, a highly sensitive eco-system giving life to arguably the world”s most beautiful coral reef, and the Dead Sea, the lowest point on earth and the world”s saltiest non-shallow body of water. These are all examples of unique shared eco-systems in the region that necessitate regional cooperation if they are to be preserved.

By promoting this vision, we are developing the understanding that on water and environmental issues we are in the same boat together and that we are dependant on each other for mutual long-term success. FoEME promotes this vision and understanding through joint advocacy and within its projects in the different communities, with the Amman office leading the required change in Jordan, the Bethlehem office in Palestine and the Tel-Aviv office in Israel. While the same vision is espoused in all three countries, it is tailored to the appropriate cultural context in each country.

Our projects can be categorized according to the following themes:

Geographical Context – The Dead Sea Rift Valley runs from the Gulf of Aqaba/Eilat, in the south, along the Arava Valley, through the Dead Sea, up the Jordan River into the Sea of Galilee and beyond, connecting the peoples of the Eastern Mediterranean. Many of our projects are located along this shared, complex ecosystem.

Climate Change – Stands on its own, as being one of the greatest environmental, social and economic threats facing the planet today, especially to our scarce water resources.

All of FoEME”s transboundary projects include Israeli, Jordanian and Palestinian youth, adults, mayors and municipal representatives in community work, as well as Israeli, Jordanian and Palestinian scientists, researchers, and other experts in research based work, all working together to foster platforms for dialogue to promote environmental sustainability and peace.

Major projects and research are being undertaken by FoEME, focusing on the issues of shared water crisis of Palestinians, Israelis and Jordanians. Through the development and implementation of numerous projects and scientific research initiatives, EcoPeace/FoEME has successfully demonstrated the willingness of peoples to work together to protect and rehabilitate their natural environments upon which their livelihoods depend. The integration of the top-down advocacy approach coupled with the bottom-up community approach has proven to be an effective organizational strategy that creates a platform for dialogue for peace and coexistence seeing successful initiation and implementation of cross border environmental projects. The following paragraphs outline the major initiatives that are being undertaken by FoEME.

FoEME”s work with WRAP will compliment the organizations” multilevel approach and ongoing projects. Through its Good Water Neighbors program, FoEME has been working with students and teachers to install water saving devices, including rainwater collection units in communities throughout Israel, Jordan and the West Bank. In addition, the eco-friendly parks established by FoEME incorporate principles of water conservation in their planning and implementation. WRAP”s board is made up of individuals with a wide range of relevant expertise including water usage management, corporate sustainability and cross-cultural communication in the Middle East. The combined experiences of the two organizations will contribute to this collaborative endeavor.

The organizations will begin by installing rainwater collections units in East Jerusalem and Palestine. The first project of this kind will be conducted at the Sur Bahr Girls School in East Jerusalem. Following FoEME”s multilevel approach, the rainwater collection system will also be used as a teaching tool as students and teachers will be incorporated in the design and construction of the unit, and water usage curriculum related to the project will be given to teachers. At the same time, the project will help to bring attention to the need for improved water allocation and usage practices in the West Bank and highlight the benefits of international cooperation and expertise sharing to sustainable global development. FoEME looks forward to working with WRAP and hopes this exciting project will be one of many.