The Nation’s “Biggest Polluter” May Be Its Best Environmental Steward

The Nation’s “Biggest Polluter” May Be Its Best Environmental Steward 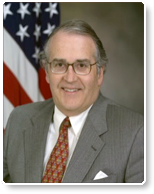 An oft-repeated mantra is that the United States Department of Defense (DoD), is the Nation’s “Biggest Polluter.” Given the immensity of our military enterprise ($750 billion annual budget, a majority of the buildings of the federal government, and a majority of the government’s energy use), that may be technically true in terms of size. But, in reality, the statement is misleading at best. In fact, DoD is fast becoming one of our country’s leading environmental stewards.

While DoD faces cleanup responsibilities from past pollution throughout its military facilities, it is meeting those responsibilities with a $3 billion per year remediation and munitions response program that has examined almost 30,000 sites and addressed over 75% of those sites requiring some remediation. Military facilities, according to USEPA, currently have a 98% compliance rate, equivalent to that of top industry leaders.

Most importantly, DoD has learned from its past mistakes.  It has gone beyond environmental compliance to be proactive stewards in many communities and industrial fields. For instance, after years of stonewalling neighborhood complaints of groundwater contamination, the Defense Supply Service Center’s Richmond facility decided to address problems in 2003 by launching V-REMS (Virginia Regional Environmental Management System) in partnership with surrounding communities, state and local governments, corporations, and other interested private parties. This unique effort has proven so successful that it has expanded to nearly 100 members, including other military facilities, throughout central Virginia. V-REMS is now focused on such larger challenges as bringing the Richmond Metropolitan area back into ozone attainment for improved air quality. These forward-leaning efforts by V-REMS have resulted in awards from the Governor of Virginia, DoD, and the White House.

Another example of DoD learning from past experience involved contamination of drinking water in various locations throughout the United States due to DoD use of perchlorate, a stabilizing agent in munitions and flares. Once again, after years of denying both responsibility and harm, DoD decided to create the Emerging Contaminant Directorate in 2004 to engage on the issue with the affected communities and government regulators in a transparent fashion to seek all relevant facts and the best available science. As a result of this initiative, the military’s role in perchlorate contamination of drinking water was found to be very limited.

More importantly, the DoD internal process established by the Office of Emerging Contaminants has been expanded into a comprehensive examination process of all potential chemicals of concern. This program of chemical management and risk analysis, the first of its kind in the federal government, has caused their military to substitute proactively the use of less toxic components in operations and materiel. The newly-renamed Office of Chemical Management and Risk Analysis also recently received a prestigious award from Harvard University’s Kennedy School of Government for innovative management.

The Department has become a leader in other aspects of sustainability, as well. Ten years ago, the military began to realize that suburban encroachment outside the fence line was both hindering base testing and training, as well as increasing the already considerable flow of endangered and threatened species onto military installations. Realizing that it best neighbors are fields, forests, and farmland, DoD and the Services at their major installations commenced engagement with surrounding communities to ensure sustainable development adjacent to the military fence line.

This effort included the development of the conservation buffer zone program, whereby DoD and the Services provide funding for the third-party purchase and management of conservation lands and easements. The result over the last five years has been the preservation of 80,000 acres near military bases and significant habitat preservation and restoration of many of the country’s most vulnerable species.

DoD’s stewardship has been further demonstrated in a wide range of activities, from curtailment of 98% of use of ozone depleting substances to funding successful cutting-edge research on detection of buried unexploded ordinances. DoD components have led the way in improved portable battery packs, geo-thermal and desalinization projects, and research on marine mammals. Through these projects and more, fundamental cultural change is taking hold in DoD through the reexamination of daily operational and personal routines throughout the Services.