The 2016 election invites us to reimagine the role environmental protection plays in creating jobs, streamlining bureaucracy, improving public health and quality of life, and most of all, focusing on results. The obvious place to begin is our infrastructure deficit.

President elect Trump has promised to work with Congress in cutting foreign spending to redirect budget toward rebuilding our crumbling ports, highways, bridges, and water systems. The federal government has already begun to create innovative public-private partnerships, or P3s, in which creative financing is employed to leverage scarce federal funds with private-sector groups who seek to share the costs and benefits of these projects. These shifts show a broader objective of improving efficiencies within the current system.

I believe focusing on efficiency will be a hallmark strategy for the incoming administration. For example, the Water Infrastructure Finance and Innovation Act, a new federal credit assistance program, would allow limited federal dollars to be leveraged significantly relative to the amounts appropriated by Congress.

As the Resource Conservation and Recovery Act (RCRA) reaches the 40th anniversary of its enactment, The Horinko Group (THG) releases its newest white paper reflecting on the progress made, challenges overcome, and future priority areas of focus.

THG has worked to collect lessons from RCRA’s past and opportunities for its future by interviewing an array of experts who approach the topic with extensive experience from private sector and federal and state government perspectives. Also reflected in its white paper are insights shared on these topics at THG’s 2016 Summit, The Future of RCRA – Making the Business Case held in Washington, DC on October 26, 2016. The Summit convened a community of experienced practitioners to exchange ideas and discuss priorities for RCRA’s future.

To read The Future of RCRA white paper, visit: http://bit.ly/2hjJT0o 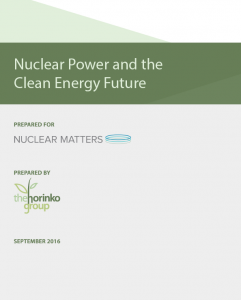 The Horinko Group is pleased to highlight the release of its latest report, Nuclear Power and the Clean Energy Future. On behalf of Nuclear Matters, THG has developed a comprehensive study that underscores the role of existing nuclear power in avoiding carbon emissions and meeting clean energy goals.

“As this report demonstrates, we should not underestimate the critical role of nuclear power in providing carbon-free energy in the United States,” said Emily Hammond, Senior Advisor at The Horinko Group, Professor of Law at The George Washington University Law School, and lead author of the report. “At a time when the market fails to value the relative carbon impacts of electricity sources, policymakers would do well to recognize the great service provided by these steady producers of non-emitting baseload power.”

The report provides an in-depth, data-driven analysis and results in two major contributions to public policy and lawmaking discussions. First, it quantifies the carbon value of U.S. nuclear power, which provides nearly 20% of the country’s electricity supply, while accounting for roughly 63% of carbon-free electricity. The report finds that nuclear power avoids over 531 million tons of CO2 emissions per year, which amounts to a social cost of over $85 billion by 2020. A collection of state-specific fact sheets accompanies the report, demonstrating the critical role of existing nuclear within each nuclear generating state.

Second, the report analyzes how states can best value nuclear power when formulating their compliance pathways under the CPP. Importantly, the adoption of a mass-based approach that accounts for new sources of emissions best values existing nuclear power to meet climate change goals.

To read the Nuclear Matters press release about the report, visit http://bit.ly/2dflsge

THG, in partnership with the Association of State and Territorial Solid Waste Management Officials (ASTSWMO) and the Interstate Technology and Regulatory Council (ITRC), will be convening our next Summit, The Future of RCRA – Making the Business Case, on October 26, 2016.

The Resource Conservation and Recovery Act’s (RCRA) regulatory and enforcement programs have accomplished a great deal over the past forty years. At its 40th anniversary, the RCRA statute stands to achieve much more. Looking forward, real progress will be made through collaboration with states, local governments, industry, academia, and communities. How can we capture the accomplishments of the past and leverage these results into a new, innovative, and productive enterprise? As U.S. EPA fashions its approach to RCRA 2040, we gather a community of experienced practitioners to exchange ideas and shape the debate about the future of this important program.

Thanks in advance to our Summit partners, ASTSWMO and ITRC, and to our Summit sponsors, Booz Allen Hamilton, Sustainable Remediation Forum, HSW Engineering, Republic Services, Institute for Scrap Recycling Industries, and Cement Kiln Recycling Coalition. The Summit will also take place the day before ASTSWMO’s Annual Meeting, which will be held in Washington, DC from October 27-28. For more details on that event click here.

To see more information on the Summit, visit http://bit.ly/29gVmYf. 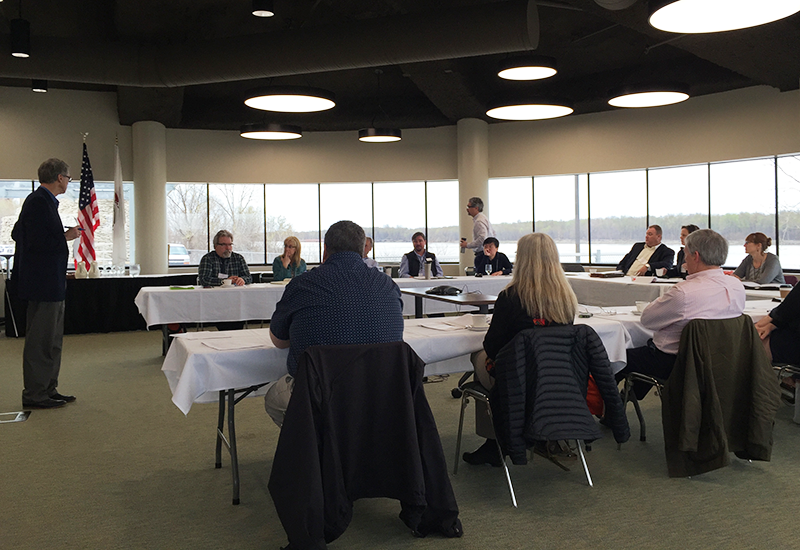 On March 29-30, 2016, in cooperation with the Cooperative Ecosystem Study Unit (CESU) Program, The Horinko Group helped to organize a scoping roundtable of CESU Directors and member institutions to discuss the potential for a Great Lakes, Rivers, and Gulf Inter-Unit (GLRG) Research Consortium. Hosted at the National Great Rivers Research and Education Center near the confluence of the Mississippi, Missouri, and Illinois Rivers in East Alton, IL, the purpose of the scoping effort was to identify pathways to optimize collaboration on complex system-scale challenges and reveal an institutional arrangement and integrative synergy in support of Federal Agencies whose missions and programs contribute to informed policy and management of our nation’s most critical and iconic large aquatic ecosystems.

To advance the Consortium scoping discussion, THG Senior Advisor Patrick McGinnis participated in a follow-up session focused on landscape-scale partnerships at the 2016 CESU Network Biennial National Meeting on June 16 at the National Conservation Training Center in Shepherdstown, WV. “CESU is an under-optimized research tool that has proven itself over and over. Making more federal managers aware of its capacity and its ability to build eco-regional knowledge platforms that can drive efficiency and effectiveness in natural resource decision making is crucial,” says McGinnis. Representatives from different CESUs shared lessons from regional efforts and discussed potential next steps for positioning CESUs to add value to regional science, stewardship, governance, and policy activities.

The House Energy and Commerce committee, Subcommittee on Environment and Economy, held a hearing on July 13, 2016 to examine implementation of the Comprehensive Environmental Response, Compensation, and Liability Act (CERCLA). Marianne Horinko, President, The Horinko Group testified at the hearing offering a number of suggestions for how the efficiency and effectiveness of CERCLA might be improved.

The committee’s press release summarizing the hearing can be found at this link.

Witness testimony and the archived webcast of the full hearing can be found at this link.

In a recent article published by Bloomberg BNA, Lindene Patton, Senior Advisor to The Horinko Group, explores the need and opportunities to identify, quantify, and recognize the risk to creditworthiness presented by climate change. The article, Climate Change and Hedging: One Person’s Opportunity is Another’s Credit Risk, presents a comprehensive view of why the time is right for further development and deployment of natural catastrophe risk analysis tools by those outside the insurance industry who bear the risk of extreme weather events and climate change.

The following is an excerpt from the article’s introduction:

This event, now in its second year, has witnessed expanding participation, illustrating the interest in local food systems, a greater awareness of food security issues at the community level, and a concern among a growing segment of the population on food safety.

Emily Hammond, Senior Advisor to The Horinko Group, and Professor of Law at George Washington University Law School, joined a panel of experts to discuss the future of nuclear energy at New York University School of Law on March 23, 2016. The panel, entitled “Nuclear Energy and the Clean Energy Future,” and the breadth of the discussion was covered in an article by Aaron Larson in Power Magazine. The article describes and quotes Ms. Hammond’s comments on the need to maintain the existing nuclear fleet. The following is an excerpt from the article:

“We cannot afford to lose our existing nuclear fleet, because of the carbon benefits that it provides,” Hammond said.

She noted that trying to replace the current nuclear generation with renewables is simply not possible in the short term. Hammond also suggested that people have skewed risk perceptions when it comes to nuclear power. If actual data and risk assessments are reviewed, Hammond said people would see that nuclear is one of the safest means of producing electricity in the world, safer than hydro and far safer than fossil fuels.

“I think it is imperative that we look for policy solutions that help maintain the nuclear fleet, at the very least, if not incentivize new construction,” Hammond said.

The full article can be accessed at http://bit.ly/21JivWq.

EPA Alumni Association Essays Celebrate “A Half Century of Progress”

The EPA Alumni Association has prepared an overview essay,Protecting the Environment: A Half Century of Progress, to tell the story of the major environmental challenges that the nation faced in the latter half of the 20th Century and describe EPA’s role in mitigating them. The overview is accompanied by seven supporting essays providing a more in-depth look at EPA’s air, water, drinking water, waste management, Superfund, pesticides, and toxic substances programs. The essays capture the environmental problems that existed, the major actions taken, the progress made, and the challenges that remain.

Marianne Horinko, President, The Horinko Group, and Cathryn Courtin, Program Manager, The Horinko Group contributed to this effort as authors of the waste management program essay, which details the role of the RCRA program in transforming the country’s approach to managing waste from generation to disposal.