On behalf of the Conservation Leadership Council (CLC), The Horinko Group has developed a new study entitled The Role of Green Infrastructure—Nature, Economics, and Resilience. Green infrastructure is an emerging approach to address the challenges of the 21st century within the water sector. It relies upon nature-based systems and processes in place of structural and highly-engineered traditional infrastructure. THG’s report, released by CLC on December 8, 2015, examines the potential of green infrastructure to reduce costs, enhance resilience, and provide social, environmental, and economic returns. It presents the current policy context and then sets forth the opportunities and policy pathways to enhance consideration of green infrastructure in federal, state, and local decisions about water-management infrastructure. The report also examines new market-based approaches, such as water quality trading and public-private partnerships, that offer the potential to expand green infrastructure investment.

Mathy Stanislaus, EPA Assistant Administrator for the Office of Solid Waste and Emergency Response, recently represented the United States at the kick-off event of the G7 Alliance for Resource Efficiency in Berlin, Germany. Mr. Stanislaus shares his perspectives about the G7 and their focus on sustainably produced renewable resources, known more commonly in the U.S. as sustainable materials management, in an October 19, 2015 article on the EPA blog. The article shares highlights from the G7 meeting in Berlin and perspectives on the future efforts of the Alliance.

Seth Brown is Principal and Founder of Storm and Stream Solutions, LLC, a consulting firm providing a range of services from policy and infrastructure finance analysis in the stormwater sector to the development and delivery of technical and policy-related training focused on stormwater topics. Mr. Brown joins THG as Senior Advisor for Stormwater/Green Infrastructure, Public-Private Partnerships, & Economics.
To read Mr. Brown’s full bio, visit: http://bit.ly/1USS7v5

James Hill, Principal, JM Hill Consulting has over thirty years of federal public service with the U.S. Army Corps of Engineer as a professional water resources planner and operational manager. Recently retired from the Corps, Mr. Hill has long been recognized as a national expert in operational master planning within the Corps. Jim serves as THG’s Senior Advisor on Water Resources Planning and Development.
To read Mr. Hill’s full bio, visit: http://bit.ly/1Fdow8F

Recognizing the Women’s Council on Energy and the Environment

The Women’s Council on Energy and the Environment (WCEE) is a non-partisan, policy-neutral professional organization focusing on women, energy, and the environment based in Washington, DC.  WCEE hosts luncheons, speaker events, receptions, and networking opportunities of all kinds throughout the year, bringing together members across the energy and environmental fields to exchange thoughtful dialogue and foster personal and professional growth.  The Horinko Group is a long time supporter of WCEE’s important efforts.

The August 2015 edition of WCEE’s newsletter, The Current, featured articles authored and co-authored by Cathryn Courtin, Program Manager, The Horinko Group. The first article authored by Ms. Courtin, “Sacred Cow Gets Controversial Closer Look: Energy Efficiency,” discusses recent research questioning the efficacy of energy efficiency standards.  A second article, “Media Perspective: What Will Presidential Candidates Bring To the Table?” co-authored by Ms. Courtin and Pat Courtney Strong, President, Courtney Strong Inc., looks at energy and environmental issues in the 2016 presidential campaign and election based on perspectives given by journalists for the New York Times and the Alaska Dispatch at a WCEE event in April 2015.

To read The Current visit: http://bit.ly/1KAMVlx

A Primer for Revitalizing the Brownfields Revitalization & Environmental Restoration Act

It is becoming increasingly commonplace for newly enacted legislation to suffer from glaring ambiguities or, even worse, words that suggest the opposite of what the legislative history unambiguously describes as Congress’s aim. The celebrated “Obamacare” case provided a clear example of this phenomenon. The statutory language, read in isolation, suggested that health insurance subsidies were only available in states where the state government, rather than the Federal government, had established health insurance exchanges. But the U.S. Supreme Court examined the language in context and, taking into account what Congress was trying to achieve by enacting the Affordable Care Act, concluded that the health insurance system established by Congress would collapse if the legislative text were read to preclude nationwide subsidies.

A similar examination into the context and legislative intent needs to occur when courts interpret the Brownfields Revitalization and Environmental Restoration Act of 2002, commonly known as the Brownfields Amendments to CERCLA. Unfortunately, while only few courts have addressed the Brownfield Amendments, the courts have done little to interpret the statute in light of Congress’ aim in enacting the Amendments. The Virginia Environmental Law Journal has published an article by William R. Weissman and J. Michael Sowinski, Jr. (33 Va. Envtl. L.J. 257 (2015)) that does just that. The article examines the context and legislative intent of the Brownfields Amendments to demonstrate how certain key aspects of the Amendments can and should be interpreted by courts to protect innocent brownfield purchasers from CERCLA liability and how some courts may be getting it wrong.

As its principal feature, the 2002 Brownfields Amendments created incentives for property developers to acquire environmentally contaminated brownfield properties and to cleanup and redevelop these properties into economically productive enterprises. Congress was responding to many years of developer reluctance to acquire and redevelop these abandoned properties for fear that by becoming owners of contaminated properties they would become potentially liable for the entire cleanup cost, even when these developers had nothing to do with causing the contamination.

To create these incentives, the statute established liability defenses for three types of “innocent” purchasers – (1) innocent landowners (ILO); (2) contiguous property owners (CPO); and (3) bona fide prospective purchasers (BFPPs). A property owner can qualify for these defenses by conducting a pre-acquisition due diligence in accordance with EPA’s All Appropriate Inquiry regulations and, importantly, by satisfying enumerated statutory post-acquisition continuing obligations at the property. Of the three defenses, only BFPPs can satisfy the defense even if the buyer knows the property is contaminated before acquiring it. Thus, as a practical matter, most brownfield purchasers seek to qualify as a BFPP.

Congress passed the Brownfields Amendments unanimously and its aim could not have been clearer. As Senator Barbara Boxer (D-Calif.), one of the bill’s sponsors, explained:

Senator Mike Crapo (R-Idaho) echoed this view. He focused his remarks on removing the impediments that discouraged developers from stepping up to the plate. The goal is

not simply [to] create another approach to the issue that runs into the same problems we have dealt with under the Superfund statute for so many years. In other words, we need to craft it so the effort to reclaim these areas and make them green again is not a failure and we don’t simply pass legislation that creates another set of difficult, burdensome approaches to the issue.²

Despite such unambiguous evidence of congressional intent, nearly all property owners that have invoked the BFPP defense in CERCLA litigation have failed. Courts construing the Brownfields Amendments have largely ignored Congress’ intent to strike a balance between the dual goals of brownfield redevelopment and site cleanup by removing unnecessary impediments to acquiring and redeveloping brownfield properties. In a startling misapplication of the doctrine of stare decisis (the legal principle that past judicial decisions become precedents in future cases), courts construing the Brownfields Amendments continued to adhere to prior judicial interpretations of CERCLA that perpetuate the impediments to brownfield redevelopment that the 2002 Amendments sought to overcome. To be sure, the courts are not entirely to blame for this lack of progress in brownfield redevelopment. In some of the cases where the BFPP defense was rejected, the developers failed to demonstrate that they had satisfied the continuing obligations.

Messrs. Weissman’s and Sowinski’s article, titled “Revitalizing the Brownfields Revitalization and Environmental Restoration Act: Harmonizing the Liability Defense Language to Achieve Brownfield Restoration,” demonstrates that the liability protection offered by the Brownfields Amendments can and should be interpreted to work as Congress intended. The article provides a close examination of the legislative materials and case law related to three of the most problematic continuing obligations associated with the liability defenses: (1) the prohibition of disposal of hazardous substances after acquiring the property; (2) compliance with land use restrictions and not impeding the effectiveness of institutional controls; and (3) the prohibition of a contractual relationship between a BFPP and a CERCLA liable party.

The disposal prohibition may provide the most striking example of courts relying on pre-2002 precedent rather than the intent of the Brownfields Amendments. Parties remain eligible for liability relief under the Brownfields Amendments’ liability defenses only if “disposal” does not occur after they purchased the property. Problematically, some pre-2002 CERCLA cases state that moving contaminated soil within a property – almost certainly an inevitable consequence of property redevelopment – as well as certain “passive migration” can constitute a new disposal. Does it make sense to disqualify developers from the liability defenses for doing the very acts that Congress was promoting? That surely cannot be what Congress intended.

The need to comply with “land use restrictions,” though not yet litigated, nonetheless causes consternation among brownfield attorneys and has led to controversial guidance from EPA. The Brownfields Amendments do not define “land use restrictions,” leaving open the question of how narrowly or expansively this phrase should be interpreted and, in turn, the breadth of compliance required by those seeking liability defenses.

The contractual relationship prohibition has already tripped up one BFPP who, as part of the purchase price for the property, agreed to indemnify the seller if the seller were ultimately held liable for response costs at the property.

These statutory provisions provide classic examples of ambiguous, redundant, and confusing legislative language that, depending on how courts interpret them, could essentially negate the liability defenses that Congress established to incentivize brownfield redevelopment. For each of these continuing obligations, the authors suggest an interpretative approach that reconciles the legislative language with what Congress sought to achieve with the 2002 Amendments. The article also provides guidelines to assist new property owners in satisfying the continuing obligations, especially the obligation to exercise appropriate care in managing releases on the property by taking reasonable steps to stop a continuing release, to prevent any threatened future release, and to prevent or limit human, environmental, or natural resource exposure to an existing hazardous substance release.

The full article is available at: http://bit.ly/1OCeQYe . 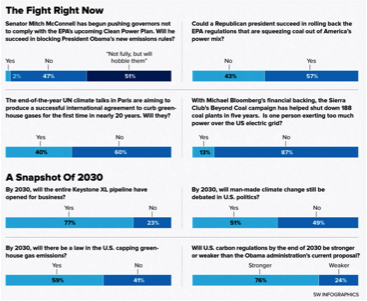 POLITICO’s recent story “The power crisis we’re ignoring,” surveyed 47 top energy experts from various sectors and organizations.  Marianne Horinko, President, The Horinko Group was among the survey respondents who weighed in on the future of EPA regulations, Keystone, nuclear energy, the UN climate talks, and more.  The piece was featured as part of POLITICO’s launch of The Agenda, a project described as, “POLITICO’s new home for the daily conversation around the ideas reshaping the country.” 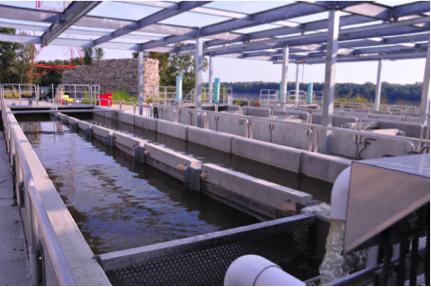 The National Great Rivers Research and Education Center (NGRREC) recently announced a number of developments to their water quality research programs. NGRREC is now accepting proposals for research projects, which can utilize mesocosms at the Confluence Field Station in East Alton, Illinois, a LEED gold field station situated on the banks of the Mississippi River between the confluences of the Missouri and Illinois Rivers. 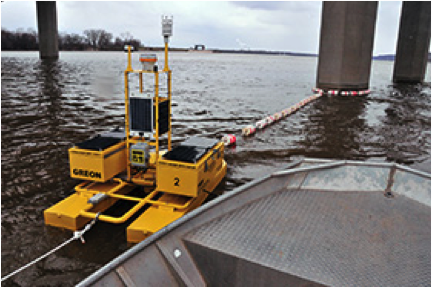 In addition, as part of their Great Rivers Ecological Observatory Network (GREON) project, NGRREC has partnered with USGS Upper Midwest Environmental Sciences Center to establish a network of water quality monitoring buoys in part of the Upper Mississippi River in Wisconsin.  The GREON project aims to establish similar water quality monitoring networks in great rivers around the world. 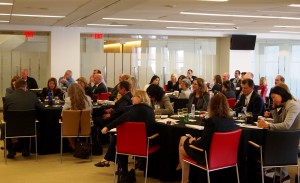 On May 14, 2015, the Air and Waste Management Association (AWMA) and U.S. EPA in partnership with The Horinko Group and Crowell & Moring hosted the inaugural Waste Information Exchange, a daylong event gathering 75 attendees in Washington, DC that facilitated robust dialogue around current trends and pressing topics on site cleanup, sustainable materials management, and emergency response.