The Association of Public and Land-grant Universities, Board on Natural Resources and Board on Oceans, Atmosphere, and Climate, recently released a new report entitled, Science, Education and Outreach Roadmap for Natural Resources.

The report takes a holistic approach to identifying research priorities for natural resources, looking collectively at the many sub-disciplines including atmospheric, coastal, fisheries, forests, marine, rangelands, water, wildlife and others. To do so, the Roadmap examines six “Grand Challenges” in natural resources, detailing for each the background, current gaps in science, education, and outreach, research priorities, and expected outcomes. The “Grand Challenge” areas studied include sustainability, water, climate change, agriculture, energy, and education.

On May 6, 2014, the National Research Council (NRC) announced the release of a new congressionally mandated report entitled, Review of EPA’s Integrated Risk Information System (IRIS) Process. The report finds that changes EPA has made to its IRIS process are “substantial improvements” and offers guidance and recommendations to further improve the program.

This report follows a 2011 review of EPA’s IRIS assessment for formaldehyde, which found deficiencies in the assessment and EPA’s assessment methods more broadly. Congress mandated that EPA implement the changes suggested in that report and tasked the National Research Council with reviewing those changes and suggesting additional modifications.

The Canadian Council for Public-Private Partnerships released a new study on March 13, 2014 titled, “10-Year Economic Impact Assessment of Public-Private Partnerships in Canada (2003-2012)”. The economic impact study, conducted by the management consulting company InterVISTAS, demonstrates the key role public-private partnerships (P3s) have played in boosting Canada’s global competitiveness by lifting its GDP and getting critical infrastructure built. The study finds that P3s have generated $51.2 billion in direct economic output and 290,680 direct full-time equivalent jobs between 2003 and 2012.

For more details and to see the full study, visit http://bit.ly/1m3QOr2

The Senate Energy and Natural Resources Committee recently released S 1971 Nexus of Energy and Water for Sustainability (NEWS) Act of 2014, a bipartisan bill which would create a committee within the National Science and Technology Committee to establish interagency coordination and streamline federal activities related to the management of this energy-water nexus.  This nexus refers to the vast quantity of water needed to produce fuels and energy as well as the vast quantity of energy needed to transport, reclaim, and treat water.  The proposed committee would be co-chaired by the secretaries of Energy and Interior and would aim to enhance the coordination of federal and non-federal research and development activities; improve relevant data collection and dissemination capabilities; and promote public-private collaboration.  The bill, introduced on January 29, 2014, is sponsored by U.S. Senators Ron Wyden (D-OR) and Lisa Murkowski (R-AK), chairman and ranking minority member of the Senate Committee on Energy and Natural Resources.

To see the full text of the bill, visit http://bit.ly/1eBhMBC.

The Assistant Administrator for EPA’s Office of Solid Waste and Emergency Response (OSWER) issued a memo in December 2013 that recognizes the ASTM Standard Guide for Greener Cleanups as a resource to reduce the environmental footprint of cleanups. The memo, which was recently posted on EPA’s website, reaffirms the Agency’s support for this effort and recommends that EPA regional offices and OSWER program offices facilitate and encourage use of the standard guide in cleanup practices. The final Standard Guide was issued in November 2013. 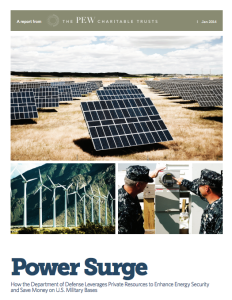 The Pew Charitable Trusts, in partnership with Navigant Research, recently released a study titled, Power Surge: How the Department of Defense Leverages Private Resources to Enhance Energy Security and Save Money on U.S. Military Bases.  The study focuses on installation energy security, or the assured access to reliable energy sources to meet operational needs at the Department of Defense (DOD) bases in the U.S. and abroad.  DOD has launched a number of initiatives to address energy challenges including energy conservation and renewable energy initiatives.  Pew has tracked these initiatives and in this latest report examines how the military is leveraging private-sector expertise and resources to deploy clean and efficient energy, thereby contributing to economic, environmental, and national security interests.

Findings from the research highlight the importance of energy security as a Department priority, the effectiveness of policies like DOD’s Master Energy Performance Plan, the essential role third-party financing is playing in energy infrastructure enhancements, and the overall acceleration in clean energy efforts.  Many other details and key lessons learned from the research are shared in the report.